Birr Town returned to action today after a break of three weeks since their last outing. They started with their customary 4-4-2 shape with some girls in new positions today. Town dominated the early proceedings and was rewarded with an early goal. Bronagh Mulroney up front today played her role in assisting Katelyn Canham to score after five minutes. Plenty of chances followed for Birr in the next few mintues however, showing that there are no easy games at this level Abbeyleix equalised on 15 minutes with a well-taken goal. The remainder of the half was a fairly even contest with Birr Town defense slightly on top, helped greatly today by Ella Loughnane who had a great game.

Town freshened things up at the break with three changes coming from the bench who had an immediate on the game. Abby Byrne in midfield was instrumental in setting up Cara McLaughlin to score Town's second goal. Abbeyleix were not long in responding with their second goal coming on twenty minutes into the second half. A draw was looking likely until Tess Liffey chose a good moment to score her first of the season with a fine finish into the corner putting Birr 3 2 up with just five minutes to go. Abbeyleix were awarded a free on the edge of the box soon afterwards with Leix Bennett pulling off a vital save to keep the grils in front. In the closing minutes Kately Canham put the home support at ease with her second goal of the game a super finish into the roof of the net. Town's player of the game was Cara McLaughlin today.

Temple Villa Aces took the all-weather pitch at Moate Community School with the jerseys inside out this morning and it soon became clear they were not the only team off color today. The first half was played with a strong breeze favoring the Aces who enjoyed the majority of the possession. The first shot in anger came after six minutes and was dealt with by Orlaith Conway in goal for Birr today. However, soon after the deadlock was broken, Temple Villa profited from some messy defending by Birr Town to score the opener after nine minutes. The second goal followed quickly two minutes later, this time following a well-worked move by Temple Villa to score from close range. Half-time couldn't come quick enough for Birr with a chance to regroup for the girls.

With the breeze behind the Birr girls started strongly in the second half with a few near chances and recent memories of a 3-0 comeback still fresh in their minds. Anna Gath made her debut for Birr Town starting the second half in midfield. The next goal was always going to be vital, alas it went to Temple Villa. Just as in the first half, they followed up with a fourth goal shortly afterward. To their credit, Birr Town Girls kept their heads and responded with a goal from Katelyn Canham with 10 ten minutes left to play. Any hope of a comeback was put to bed five minutes later with Temple Villa scoring a fifth goal. So not to be today for the Birr Girls but some valuable experience gained. Birr's player of the game was Nadine Ryan with notable performances also from Bronagh Mulroney & Millie Greenen.

Thanks to all those who traveled today.

Birr Town U13 Girls 2 St Angus 0 - September 24th
Birr Town got their season back on track on Saturday with an assured performance to overcome a determined St Angus outfit 2 0. The match took place under fine conditions at Frank O’Connor park with only a slight breeze for both teams to contend with. The first half was a close and tense affair without either keeper being called into serious action. It wasn’t until midway through the second half that the breakthrough came via inform striker Katelyn Canham, cooling finishing following an assist from Tess Liffey who partnered her up front in attack.

The girls worked hard to hold out the anticipated fight back from St Angus who had pushed them all the way last year in the league. The clincher came with about 5 minutes to go, following some great midfield play by Cara McLoughlin to setup Katelyn to round the keeper and slot in 7th goal of the season. The entire team played well today in front of a generous home crowd whose support is always much appreciated. Player of the game was Katelyn Canham.

Birr Town U13 Girls got the season underway today coming out the right side of a tough encounter with Real FA Swans with a late winner. Town today were captained by Lauren Darmody who played a pivotal role in the center of defense alongside Lexi Bennett in the first half. Early pre-season rustiness was perhaps in evidence today alongside the adjustment factor to the bigger team and pitch, which saw the girls concede an early goal inside the opening ten minutes. A further two quick goals from Real Swans on the 20 minute mark left the Birr goals facing a major task on their hands. The response was not long coming though as Katelyn Canham opened her account for the season with a well-taken goal from the edge of the penalty box on 24 minutes. Some positional changes saw town enjoy better possession as the half wore on. Nadine Ryan enjoyed a fine game today in midfield and chipped in with a superb goal from the edge of the box just before half-time.

The opening stages of the second half was a more even contest with both sides going close.  Cara Mcloughlin was in great form today in the midfield and was the joint player of the match along with Ceola Scully who made many vital interceptions and clearances from the back. Town continued to search for the equalizer and were duly awarded with Katelyn scoring her second on 56 minutes. The girls were not finished yet and showing great determination pushed on in search of the winner. To the delight of the onlooking home support, the winner came in the 59th minute with Katelyn netting from close range to secure her hattrick. There were several other notable performances throughout the team today as everyone played their role in what was a great comeback victory for the team. 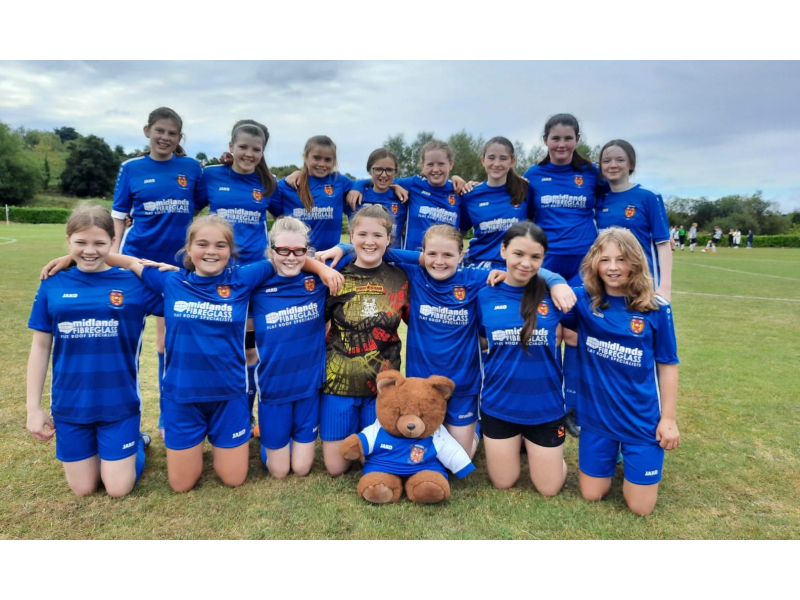